A short introduction to Cloud Directory

In this post, I model a Slack like chat system using a hierarchical data model. There are two teams. Team widdix use the general channel to discuss work-related topics, and they discuss AWS announcements in the news channel. The AWS team is busy planning re:Invent in the reinvent channel, and they use the general channel to discuss other topics. The following figure shows the chat system data hierarchy. 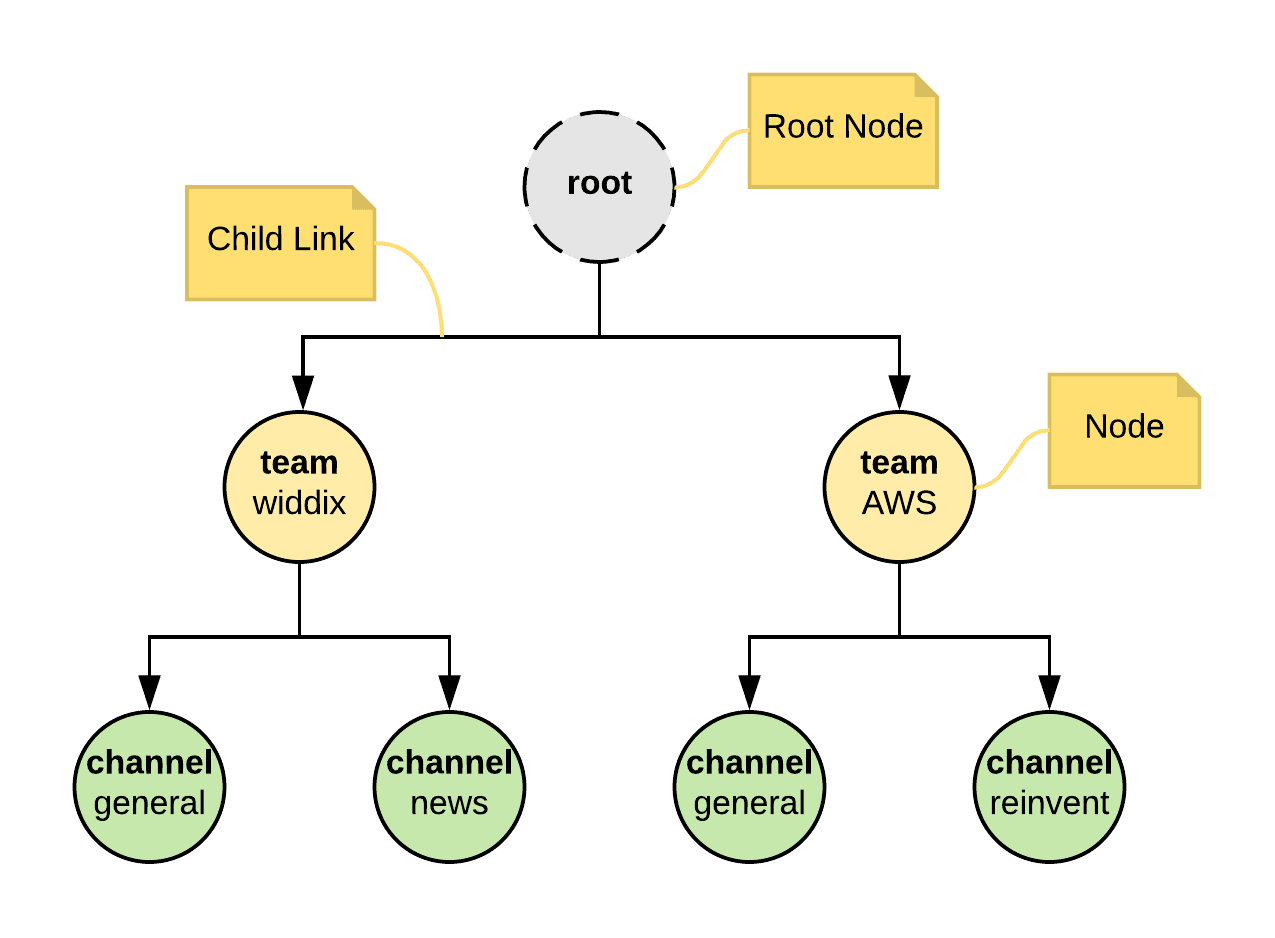 You can access a Node object in the Directory with a Selector that can be a Cloud Directory generated Object Identifier or a Path that you can control. The Selector is a string where the first character is important.

Let’s look at the Path more closely. As you already learned, when you create a Node, a Child Link is automatically created for you that points to the parent. The Child Link has a Link Name that you have to supply, and it must be unique for all nodes sharing the same parent. The following figure shows the Link Names and Object Identifiers of the chat system.

For each Node, you can get:

Storing data based on a schema

So far, I have not talked about the ability to store data besides the hierarchy. This changes now. A Facet defines a collection of Attributes. Compared to the relational database world, you can think of a Facet as a table and an Attribute as a column for now. An Attribute is defined by:

A Node can be associated with one or many Facets. The following figure shows the Facets of the chat system (each Node is associated only with a single Facet).

A Schema is a collection of Facets. Schemas are a bit tricky. When you create a new Schema, this is called a Development Schema, and you can modify it (create facets, change facets, delete facets). When you are happy with the Development Schema, you can publish it, and a Published Schema is created for you that is versioned. The Published Schema cannot be changed. It can only be upgraded in a backward compatible way (add a facet, add an optional attribute to an existing facet). When you create a Directory, you have to select a Published Schema which is then copied and becomes an Applied Schema. The Applied Schema can also be upgraded in a backward compatible way. The following table summaries the different types of Schemas.

You can now store a hierarchy together with attributes. Let’s look at one more feature: Linking nodes.

You can not use a Path to navigate with Typed Links.

The following figure shows how a Typed Link can be used in the chat system to share channels between teams. The AWS team now has access the to news channel of the widdix team, and it appears as widdix-news in the AWS team. 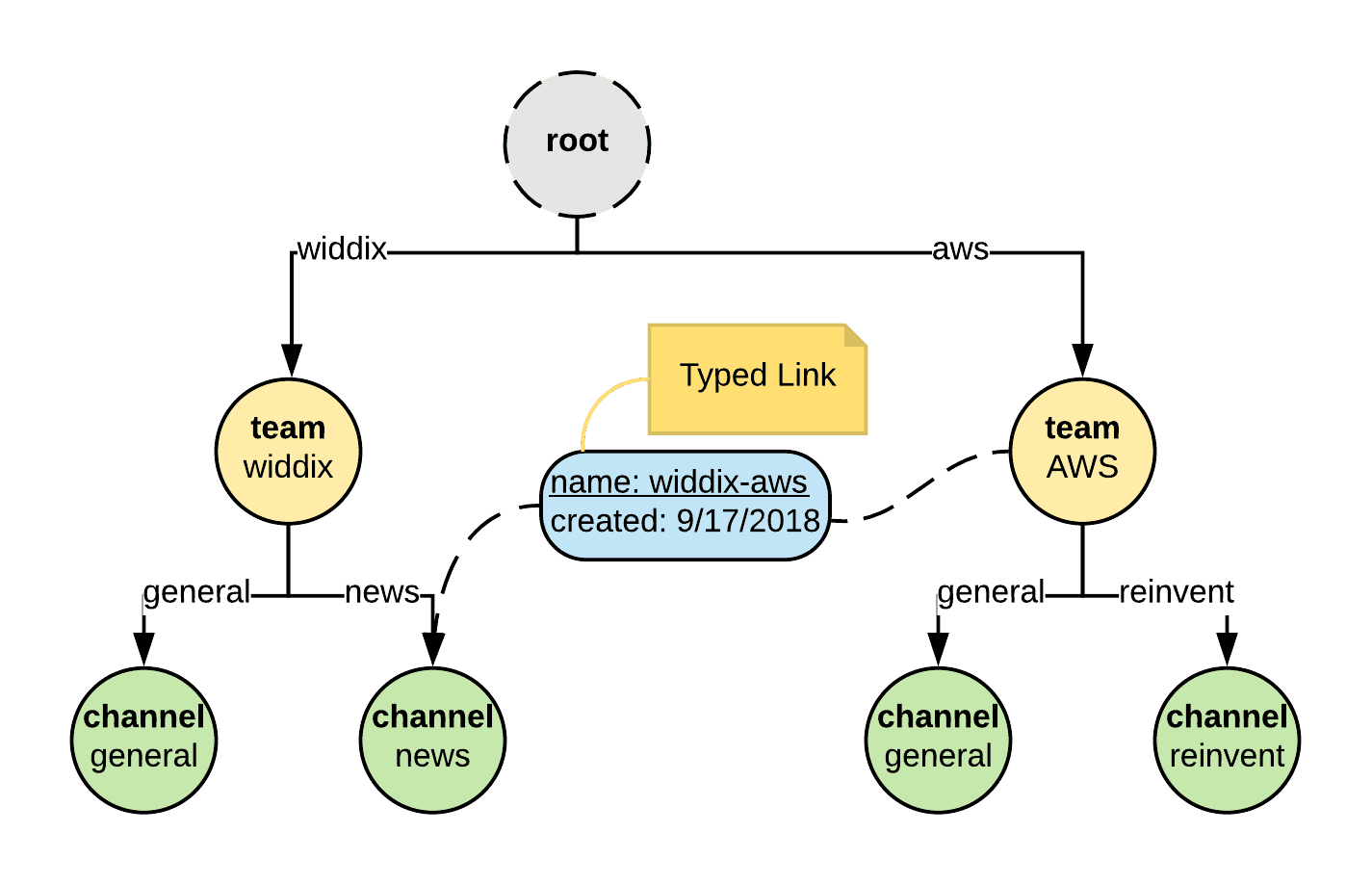 For each Node, you can get:

How does Cloud Directory fit into the Serverless space?

Cloud Directory is truly Serverless. There is zero configuration.

Cloud Directory can be used from Lamba with the AWS SDK.

Besides the features you learned about so far, Cloud Directory also has support for:

Missing features: No backup/restore capability and no visual explorer of your directory.

If you use Cognito or Organizations, your data is already stored in Cloud Directory under the covers. Cloud Directory is a serverless hierarchical data store on AWS. It is a niche service that deserves more attention because it is easy to operate (zero configuration) and comes with transactional support.

Thanks to Thorsten Höger for reviewing this article.