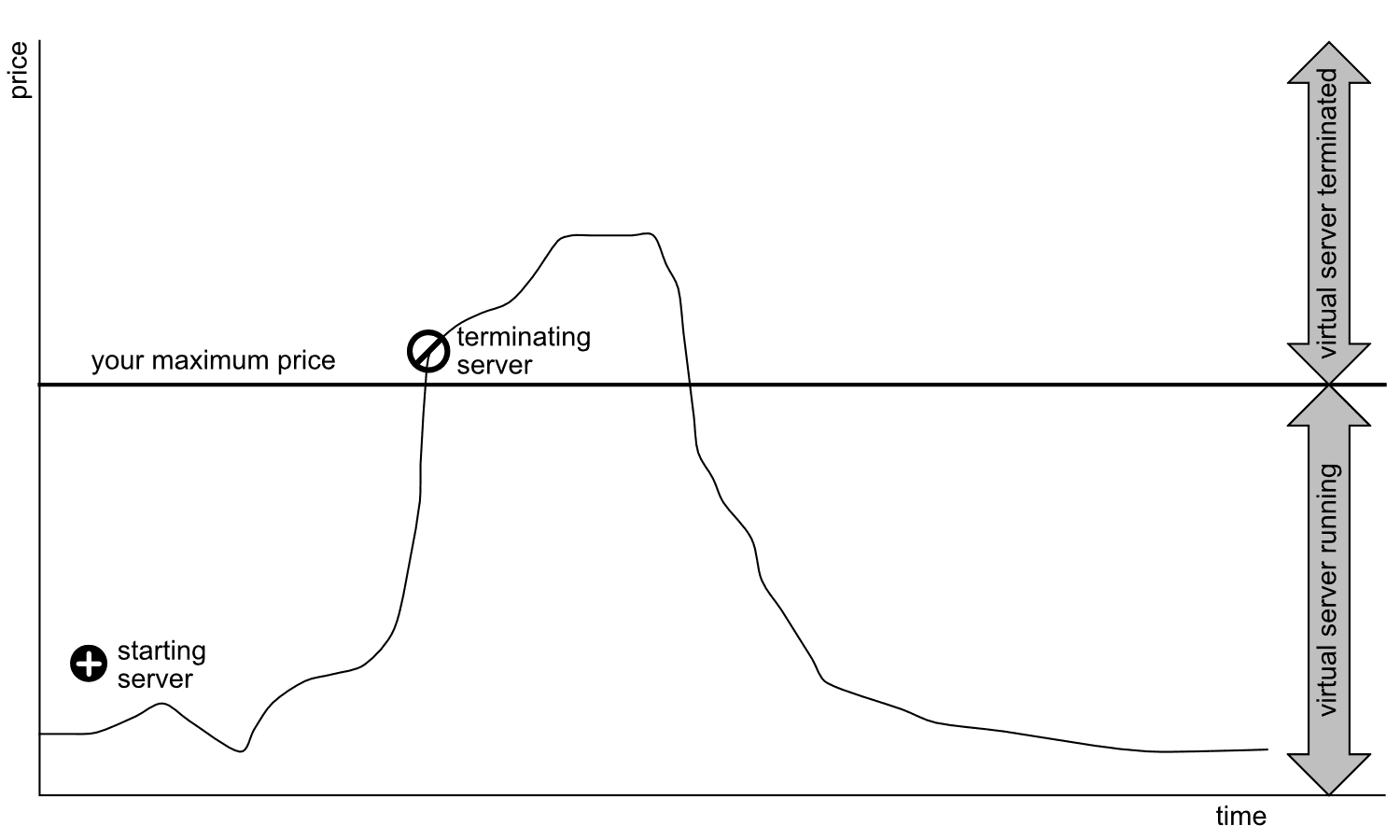 There are many different spot markets available. A spot market is defined by:

Each spot market is offering a separate current price. So when using spot instances it is an advantage to be able to use different instance types, in different availability zones or even regions, as this allows you to pick the lowest price available.

A spot instance is terminated automatically if the spot price exceeds your bid. This may sound scary at first. If you need EC2 instances for defined-duration workloads less than 6 hours there is a simple solution for that.

It is possible to bid on a spot block. A spot block defines a duration between 1 and 6 hours. An EC2 instances launched by a spot block will run continuously without interruption until it reaches the end of the defined time block. Pricing depends on the requested spot block: typically 30% to 45% less than on-demand pricing. So you are paying an extra charge on the spot price for a continuously running EC2 instance.

Creating a spot block request is simple. Executing the following command with the help of the AWS CLI will request a spot block for 1 instance running 1 hours with a maximum price of USD 0.15 per hour.

Whenever you are using EC2 instances for tasks running less than 6 hours using spot blocks is a very easy and reliable way of saving EC2 costs.

Managing and optimizing spot requests was a time consuming task. Fortunately AWS launched the Spot Fleet API in May 2015. Creating a spot fleet helps you to manage a fleet of one to thousands of EC2 instances running as spot instances.

AWS CloudFormation supports Spot Fleets. The following code snippet shows a typical example. The described Spot Fleet tries to launch two m3.medium or one m4.large instance in two different availability zones depending which option would be cheaper at the current spot prices:

Spot Fleet is a powerful tool if you want to run 1 to 1.000 EC2 instances at the lowest possible price. It can be used to launch worker clients for a Hadoop cluster for example.

It is also possible to use spot instances for typical web applications running behind a load balancer. Especially if you are using an Elastic Load Balancer (ELB), an Auto Scaling Group, and the concept of stateless servers.

If you want to make use of spot instances it is a best practice to use at least two Auto Scaling Groups:

When using AWS CloudFormation to define an Auto Scaling Group and its Launch Configuration it is simple to launch EC2 instances as spot instances. Just a single line containing the spot price needs to be added.

Perfect choice if you want to cut the expenses for your web application distributed on multiple EC2 instances.

AWS is aiming to reduce the spare capacity in their data centers. You can profit from saving up to 90% of EC2 costs when using Spot Instances instead of On-Demand Instances. There are powerful tools available helping you to use Spot Instances in different use cases: defined-duration workloads, server fleets and instances managed by Auto Scaling.