Before we start, both tools are following a very similar approach.

But what are the differences of both tools?

CloudFormation covers almost all bits and parts of AWS. Terraform covers the most important AWS resources as well. But on top of that Terraform can provision infrastructure at other cloud providers as well as 3rd party services. A shortened list of vendors supported by Terraform: Bitbucket, Datadog, DigitalOcean, Fastly, GitHubm, Gitlab, Google Cloud, Heroku, OpenStack, Mailgun, Microsoft Azure, and New Relic. 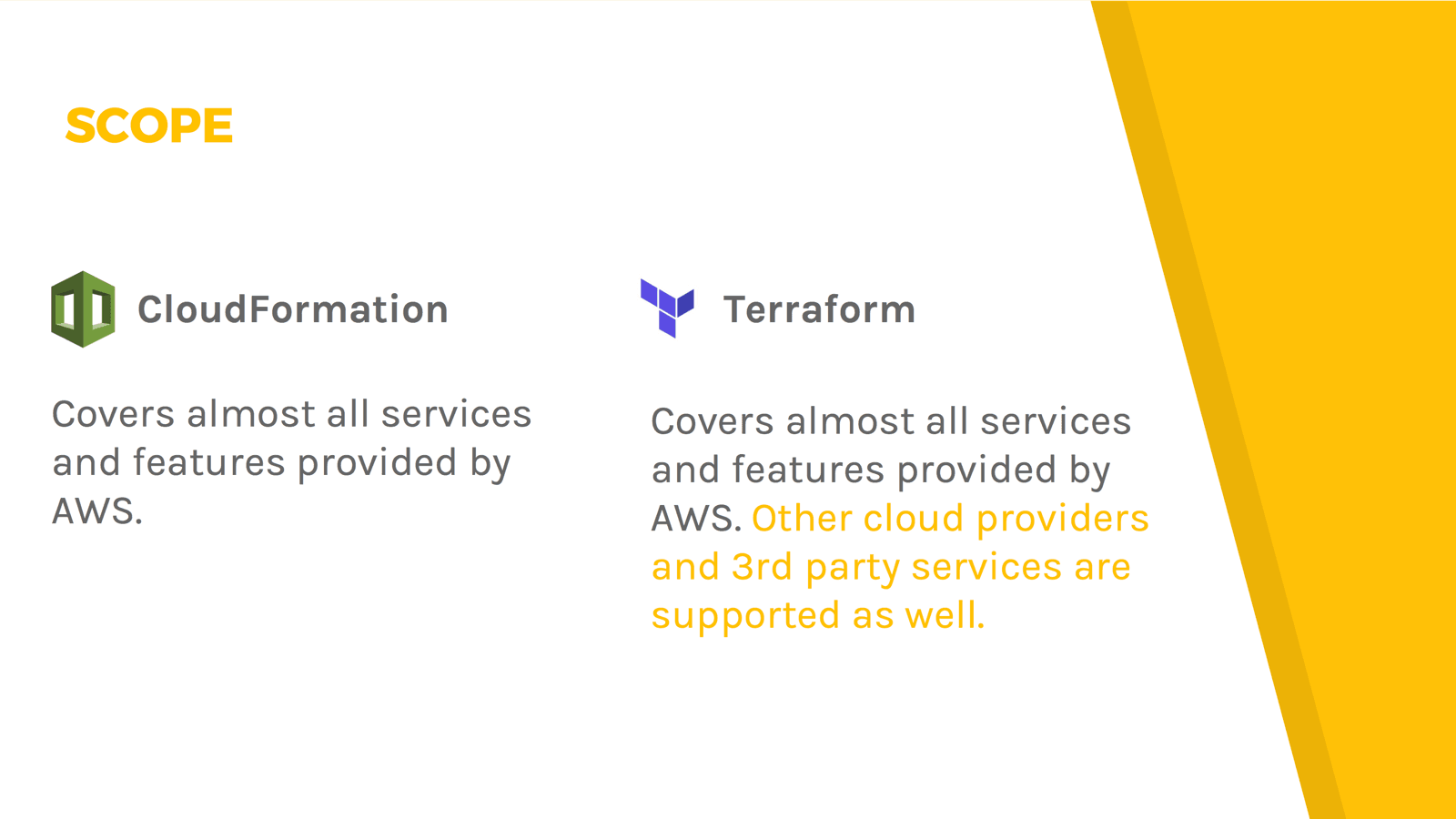 Depending on your infrastructure a big or at least small plus for Terraform.

CloudFormation is a service offered by AWS for free. The AWS support plans include support for CloudFormation.

Terraform is an Open Source project. Hashicorp, the company behind Terraform, is offering support plans as well. 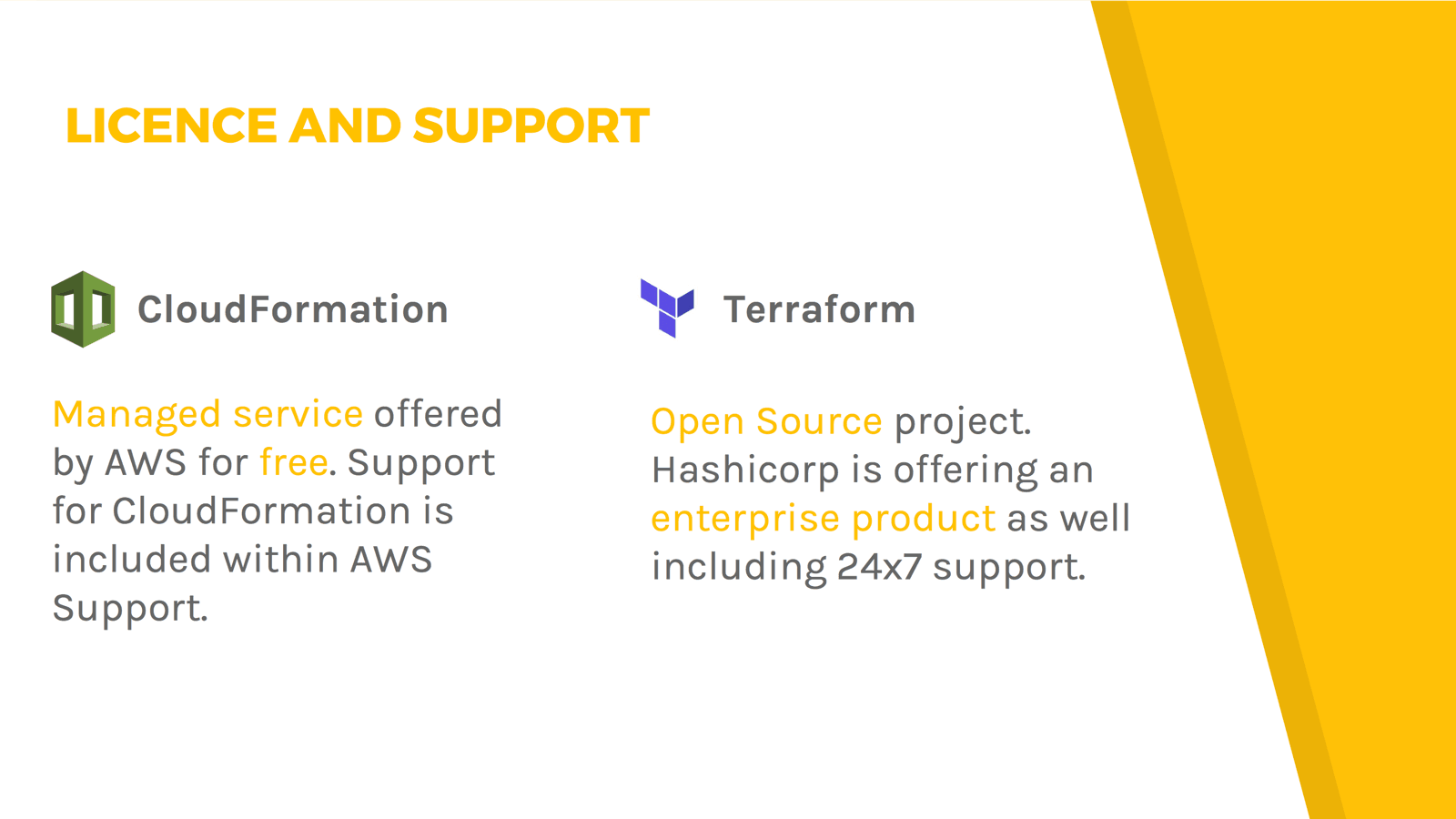 When already subscribed to an AWS support plan, that might be a plus for CloudFormation. If you prefer Open Source that is a plus for Terraform.

Both tools need to keep track of all the resources under management. CloudFormation is managing its state with so called stacks. By default, Terraform is storing its state on disk. Terraform is offering remote state as well, for example, based on S3 and DynamoDB. It is advisable to use remote state when multiple users are working on the same infrastructure in parallel. 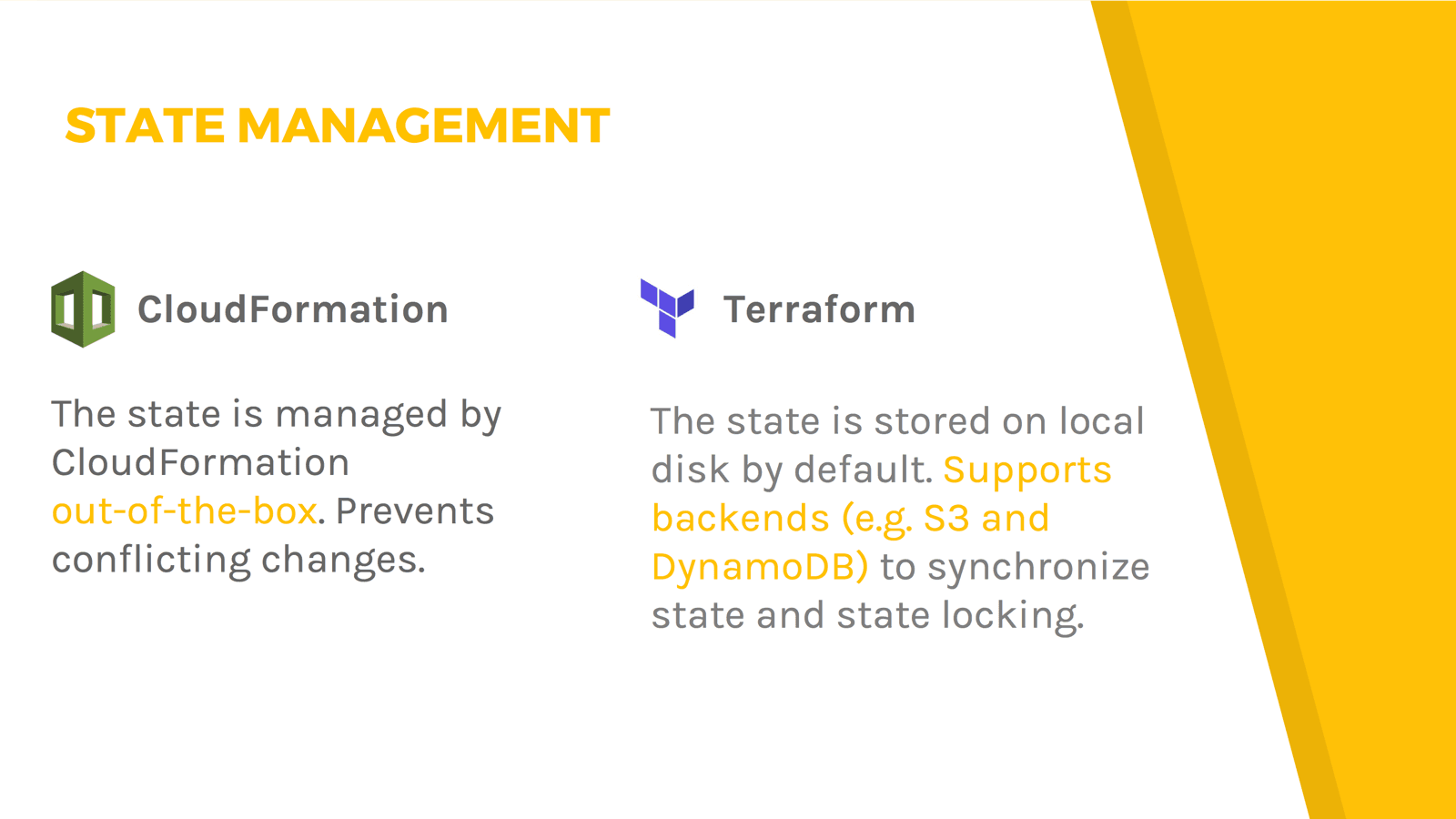 CloudFormation manages state within the managed service out-of-the-box which is a small plus compared to Terraform where you need to configure remote state yourself.

An infrastructure for a typical web application consists of a lot of resources: VPC, Subnets, Security Groups, Auto Scaling Group, Elastic Load Balancer, to name a few. Specifying all these resources in a single blueprint will cause you headaches when maintaining the system in the future. Using small modules that you stick together as needed is a common approach.

Both CloudFormation and Terraform do support modularizing your infrastructure blueprints. Handling modules with Terraform is simple. CloudFormation is offering multiple ways to create modules with different pros and cons. I’d award Terraform with a plus for usability.

CloudFormation offers change sets that you can use to verify changes. Terraform provides a command named plan which gives you a very detailed overview of what will be modified if you apply your blueprint. 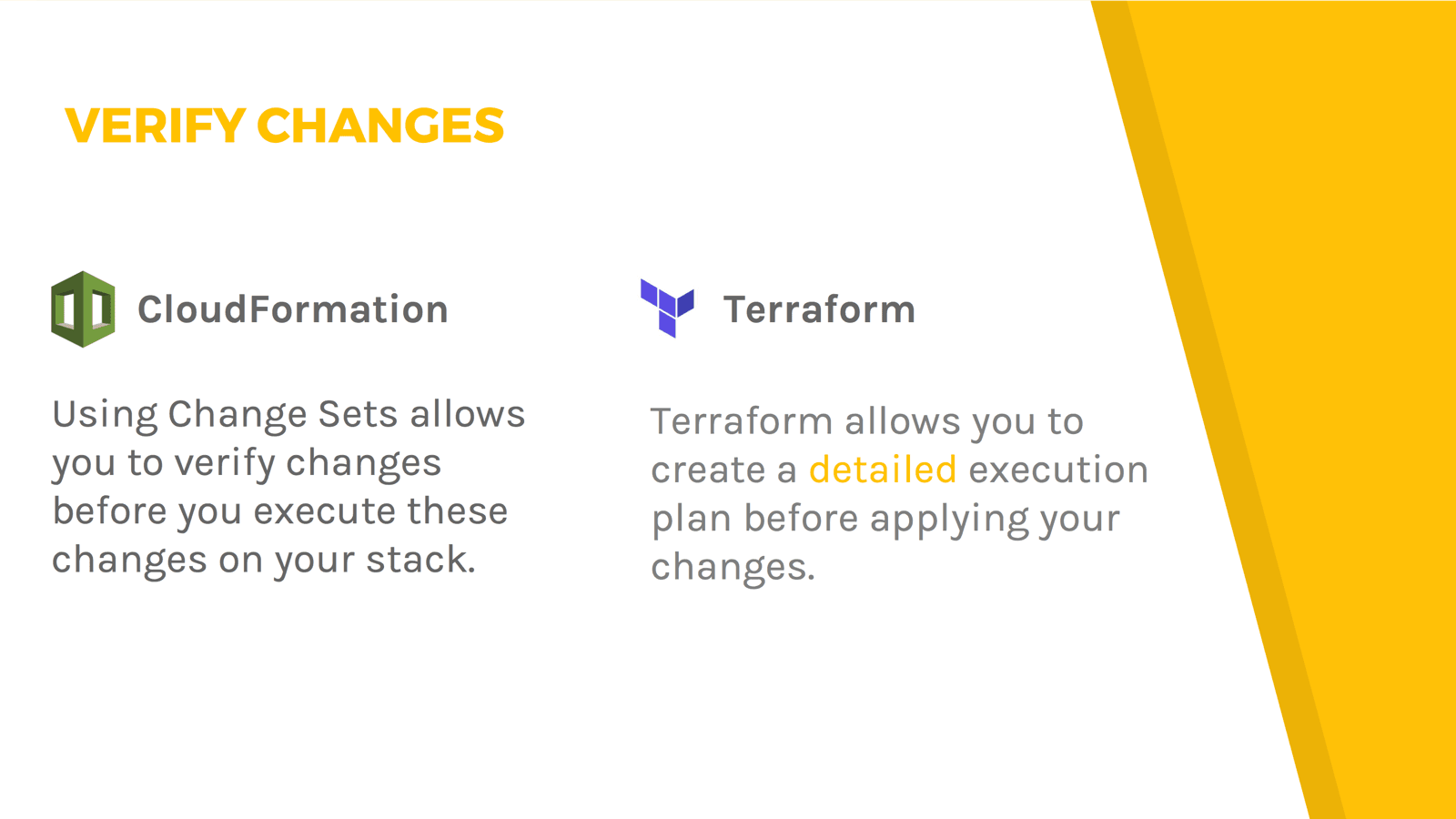 Terraform presents a detailed and readable summary of the changes that will be applied. That’s a big plus compared to the basic overview CloudFormation is providing with a change set.

It is useful to be able to add wait conditions to your infrastructure automation from time to time. For example, if you want to wait until a service has been started on a virtual machine. Using wait conditions allows you to wait for signals sent via HTTPS before depended resources are created or updated when using CloudFormation. 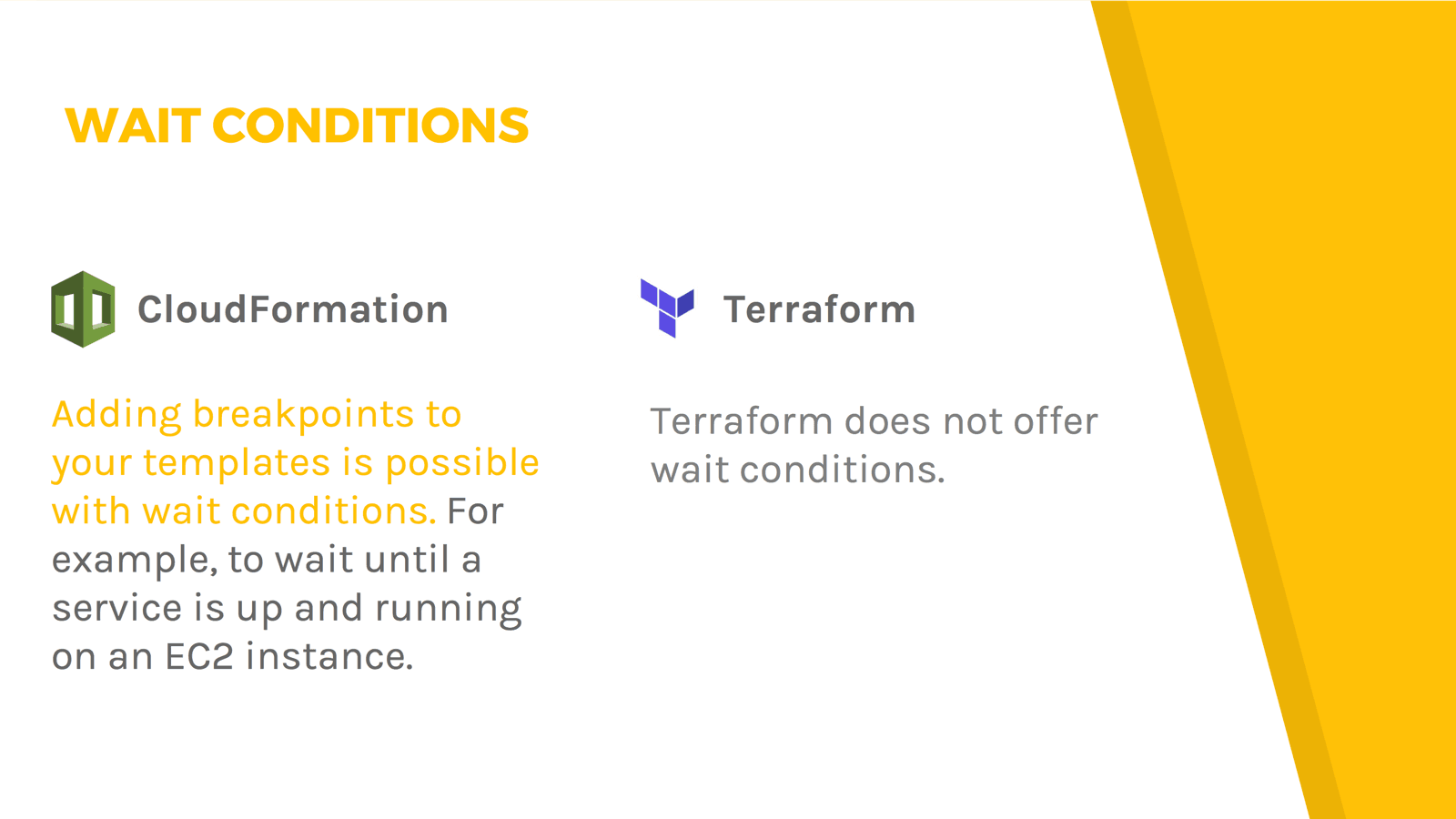 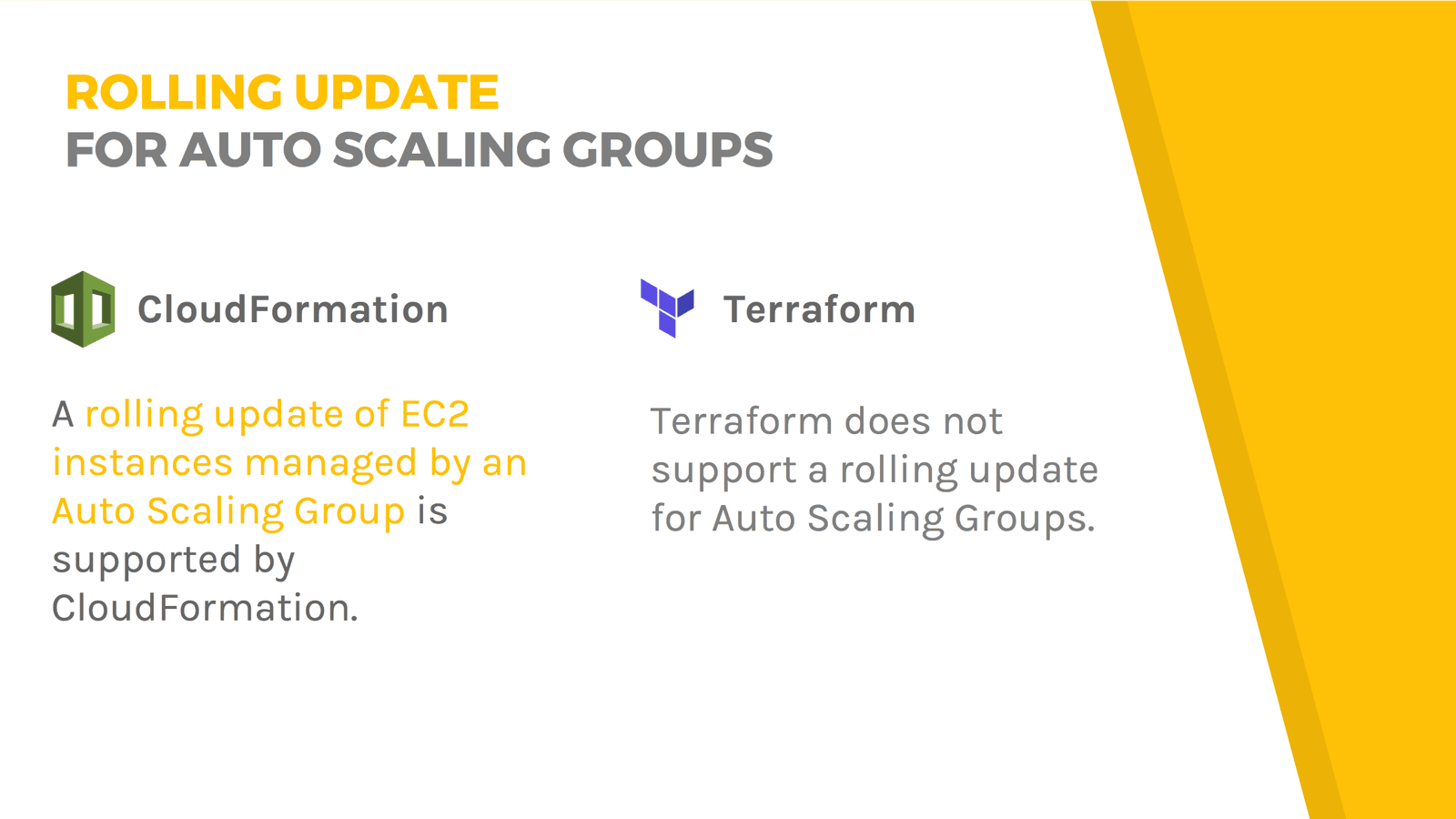 Supporting rolling updates for Auto Scaling Groups is a plus for CloudFormation.

When CloudFormation fails to modify your infrastructure, it rolls back to the previous working state automatically. Terraform does not support rollbacks out of the box. Either you decide to fix the problem and deploy again, or you have to apply the previous configuration yourself.

Handling existing resources is a plus for Terraform.