In a previous post, Getting started with AWS IoT and Tessel, you learned how to send temperature data from your Tessel microcontroller to an AWS IoT topic. You also learned how to set up an alarm that fires whenever the temperature goes above a certain point (in the example, 10 degree Celsius). But fixed thresholds don’t work for with dynamic datasets. If you want to receive an alert when the temperature becomes unusual, things get more complicated.

An unusual temperature needs to be defined first. Statistics can help us with the problem.

Look at the following visualization of this idea. 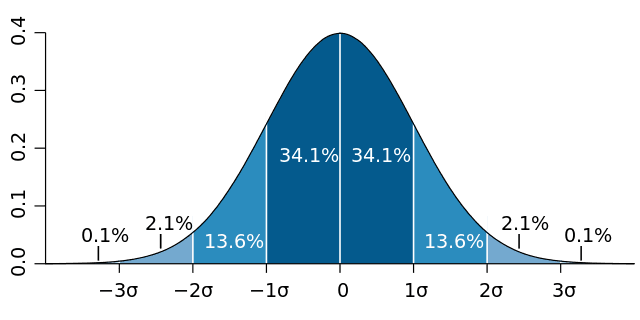 Excursion: My first job was in high frequency / algorithmic trading. I did a lot of real-time analytics on top of financial markets data like fx, stock, futures, and options prices. So let me explain the idea of averages in more detail.
The average applies to normally distributed data sets like you see in the above figure. Many phenomena in nature are bell shaped/normally distributed, e.g. size of humans.
If you apply the average to numbers like personal incomes of the people of a country, things get funny. Assume we have 100 people in our country. 99 people earn $100 while the leader makes $10,000. The average is $199. The standard deviation is $990. So an income of $10,000 is ~ a 10-sigma event. If you wait for a 7-sigma event once a day you will see one every 1.07 billion years (a quarter of Earth’s history). A 10-sigma event is impossible. Still, it’s in the data. The issue is that the data is not normally distributed.
The crux of all that is that we are usually interested in outliers while most statistics focus on the opposite. Some people even remove outliers from their data to make it normally distributed.
In our temperature example we assume a normal distribution but keep in mind that this assumption is most likely not true. You will not end up with 4.6% unusual temperatures!

Let’s do some math:

We define that a temperature is unusual, if it is not in the 2-sigma range of past values.

This works pretty well for static data sets. But in our case, new temperature data arrives every minute.

Let’s do some math:

So we can define that a temperature is unusual if it is not in the 2-sigma range of values that are not older than 1 hour.

To implement this, we are going to pipe all temperatures from the IoT topic temperature into a Kinesis Stream. A Kinesis Analytics application will connect to that stream and run the analytics logic to calculate averages and standard deviations over sliding windows. Finally, the Kinesis Analytics application writes the unusual temperatures back into a Kinesis Stream. The following figure demonstrates the flow of data.

Let’s get started! Log in to the AWS Management Console.

You need to setup the IoT example as described in Getting started with AWS IoT and Tessel.

First, we need to create two Kinesis Streams. One for the raw temperature data (input) and one for the unusual sensor data (result).

We need a second stream for the results.

Now it’s time to pipe the data from AWS IoT into the temperature Kinesis stream.

You have temperature data coming in so we can start to analyze the data. A Kinesis Analytics application consists of three parts:

But first, you need to create the application.

Kinesis Analytics is not covered by the free tier. This experiment will cost you a few dollars!

Creating the Source of the Application

The schema is discovered now. This only works if new data arrives and should look like this:

Creating the Real-time analytics logic of the Application

Creating the Destination of the Application

Consuming the unusual sensor data from the Kinesis stream

Unfortunately we can not connect a Kinesis stream with a SNS topic directly to send out the alert. But you can create a Lambda function that connects to the unusual-temperature stream and forwards the values to SNS. This is out of the scope of this post. You can also have a look at the In-application stream DESTINATION_SQL_STREAM.

Make sure to clean up the example after you are finished. Otherwise additional charges will apply.