It was never easier to scale your compute layer. EC2 Auto Scaling, Fargate, and Lambda enable horizontal scaling. But how do you scale your database? Use a NoSQL database like DynamoDB, one could say. But what if you don’t want to miss all the advantages of an SQL database? You should check out Amazon Aurora Serverless, a cloud-native SQL database. Would you rather hear than read? We have published a podcast episode about this blog post.

As shown in the following figure, an Aurora Serverless database cluster consists of two layers:

The scalable compute layer is a game-changer for unpredictable workloads or scenarios where there are no queries to the database for significant timespans. 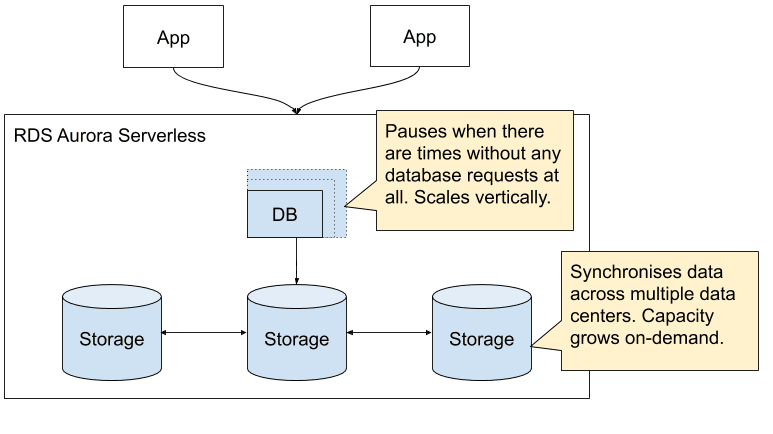 Obviously, the best way to reduce costs in a pay-per-use pricing model is to tear down unused resources. Aurora Serverless supports to pause the compute layer when there are no database queries for five minutes.

Establishing a database connection to modify or query data will resume a paused database cluster automatically. There’s only one catch to this: resuming the database adds latency to the first incoming requests. In my experience, it takes approximately 15 seconds to resume a stopped database. Peter measured the activation time more accurately and published the results in his blog post Amazon Aurora Serverless – The Sleeping Beauty.

So there is a trade-off between cost reduction and long latencies for some requests. We are using Aurora Serverless for a web-based accounting solution that is only used by a few people a few times per day. High costs savings justify waiting a few seconds for the database to resume in this scenario. Important note: pausing the database is optional. It is up to you to enable or disable auto-pausing.

Speaking about cost savings, let’s have a look at the pricing for Aurora Serverless.

In my opinion, an additional charge of this amount for the service offered is not justified. However, you can still make significant cost savings by using Aurora Serverless.

For example, think about an application that is only used during working days from 9 to 5. Outside office hours, there is no or almost no load on the system. Switching from Aurora to Auora Serverless will result in costs savings of up to 65 % for the compute layer, as shown in the following calculation:

So, depending on your workload costs for the compute layer of your database will either increase or decrease significantly.

Reliability is critical for a database. As mentioned before, the storage layer is distributed among multiple availability zones by default. To be more precise: data is replicated six times among three availability zones. That’s impressive.

However, Aurora Serverless operates in single-AZ with multi-AZ failover mode. The compute layer consists of a single instance. In case of an outage, Aurora Serverless will spin up a new instance in another availability zone. As the storage layer is replicated among multiple availability zones, data is not at risk. But it will take some time until the new instance can serve requests.

But Aurora Serverless deserves special praise at this point as it is introducing two crucial security defaults for your database:

It has always been a challenge to manage database connections when building Serverless applications even though the problems with the VPC-integration of AWS Lambda has been resolved lately1.

Luckily, AWS announced the Data API for Aurora Serverless (MySQL-compatible edition only) at the beginning of this year. The Data API allows us to encapsulate SQL statements in RESTful API requests. A perfect fit for Serverless applications which make use of RESTful APIs a lot.

So far, the Data API is only available in the following regions: US East (N. Virginia), US East (Ohio), US West (Oregon), EU (Ireland), and Asia Pacific (Tokyo). Keep in mind that the Data API requires Aurora Serverless, Aurora (Classic) is not supported.

Most important, Aurora Serverless does not support replicas. Instead, only a single instance is running at a time. Therefore, Aurora Serverless cannot offer a hot standby (see Single-AZ with multi-AZ failover). Additionally, read requests cannot be distributed among multiple read replicas, one of the critical benefits of Aurora (Classic).

And there are more missing features:

And there are more missing features compared to Aurora (Classic). See Limitations of Aurora Serverless for a complete list.

After discussing some missing features, I’d like to close with an evaluation of the service maturity.

Our maturity score for Amazon Aurora Serverless is 6.6 on a scale from 0 to 10.

No question, Aurora Serverless is an exciting service. However, you should weigh the advantages against the described limitations carefully. I’m looking forward to accompanying the further development of Aurora Serverless and am sure that many of the restrictions will soon be a thing of the past.

Looking for an example architecture? Check out our book and online seminar Rapid Docker on AWS.